What is Private Labeling?

With private labeling, there are generally two routes that a retailer can take; generic products rebranded or slight alterations to a manufacturer's existing product with rebranding. The first option allows manufacturers to sell their mass-produced generic products to any other retailers, but it's usually the cheapest option. It makes it harder to compete on product features and your only competitive advantage is branding and marketing. The second option allows you to create products that are distinctly your own and contractually only sold to you (given a manufacturer doesn't break predetermined contractual agreements), but usually at a higher cost.

It's important to try to distinguish two terms that have become almost synonymous, private labeling and white labeling. There doesn't seem to be a centralized definition for either, but we'll try to build some fences around each term so that there won't be confusion, at least when we refer to one or the other on Unwage.

In our context, private labeling is distinctly physical products that can be resold under a different brand other than the originating manufacturer. White labeling is a similar concept but it's for intangible products like software and services. There are software development companies and service providers that create "white-labeled" software/services intended for resellers to brand as their own.

Private Labeling for the Little Guys

Now you might be thinking, "Can only the big players like Costco and Amazon use the private labeling model?" The answer is a resounding no. Even aspiring entrepreneurs with relatively little capital can start their own private label brands.

There are many manufacturers in various categories around the world that provide private labeling services. Here are some below:

You might be wondering what the differences are between private labeling and dropshipping, because there are similarities but also unique differences that help in determining which business model is right for you.

With private labeling, it's more capital intensive to start because you have to purchase the inventory upfront. They'll send your products to your own storage facility or to a fulfillment center for you to pack and ship to customers. Whereas, if you do a dropshipping business, no money comes out of your pocket until a product is sold. You also don't carry storage cost because all products are kept at the manufacturer's facility. The risk you take with a private label business is higher, but the margins are usually better because of ordering quantity, branding, and control of the purchasing experience, allowing you to reduce unit cost and increase purchasing price.

Each business model has its pros and cons. It's up to you to decide which model fits your business objective.

Usually, there are minimum order quantities (MOQ) that manufacturers require as an upfront purchase. If you want to make small changes to the product, you're typically required to purchase higher order quantities because they have to retool their machines or alter their workflow slightly.

Many times, any alterations made are slight variations from the original product. It could be color, packaging, minor tweaks to the actual product, but nothing major that requires a completely different production setup. If you want something more precise and made to your exact specifications, you're looking at contract or in-house manufacturing. 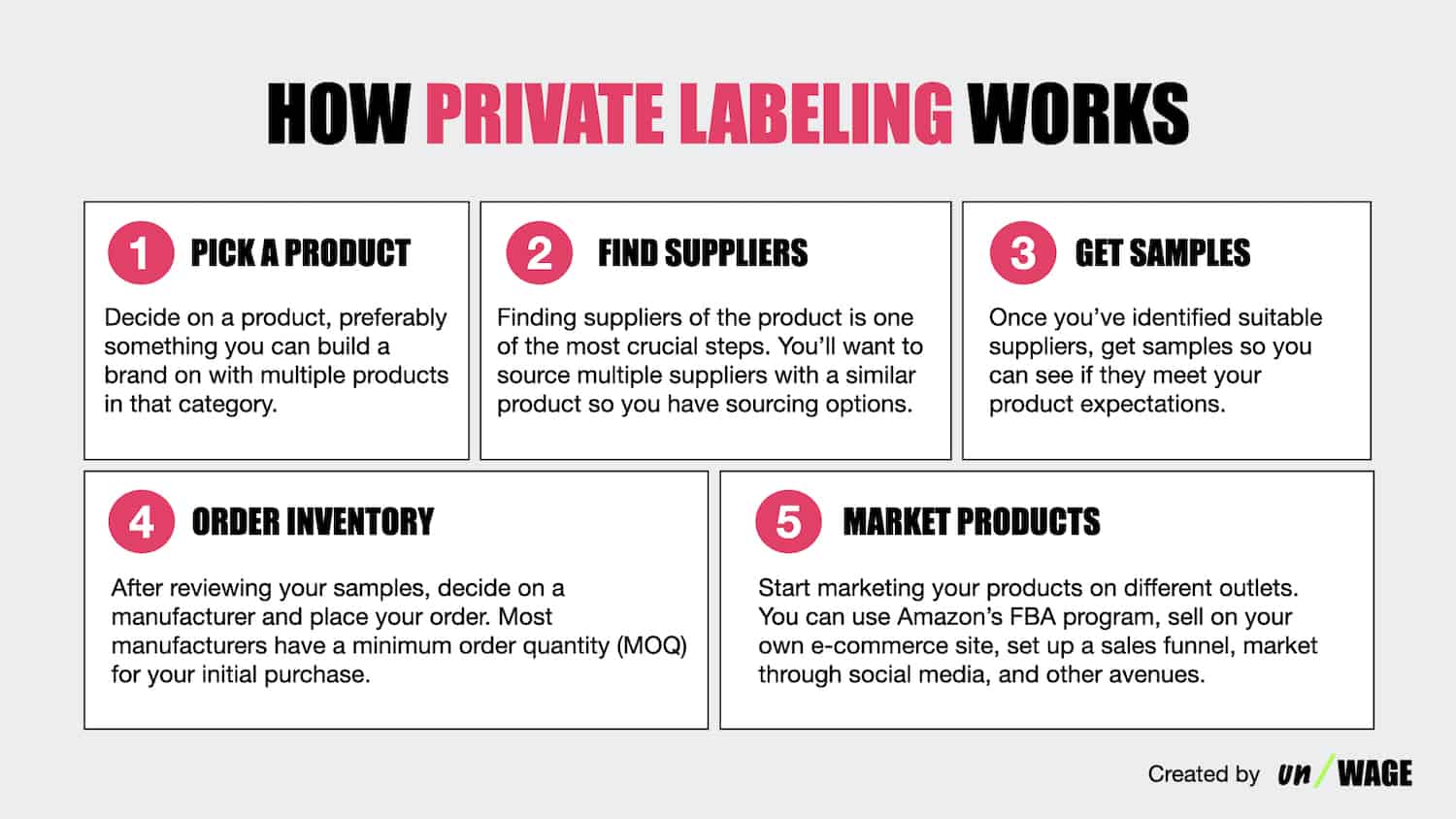 Private labeling requires the reseller to purchase an initial bulk order, at or higher than the MOQ set by the manufacturer. The order quantity fluctuates based on product and manufacturer, but oftentimes you'll see MOQ's from 100-1000 units. The cost of your product is semi-flexible, based on your purchase quantity, personal branding additions, variations to the product, and other factors.

To make money with private labeling, there are certain paths that you can take. A very popular route is taking advantage of the e-commerce giant, Amazon. Amazon provides sellers the opportunity to not only sell products on their platform but they also provide fulfillment services, FBA (Fullfilled By Amazon). This means you can have all your products sent directly to Amazon's warehouse from your manufacturer. Amazon will pick, pack, and ship your products whenever someone buys it off their site.

It's a popular route for many e-commerce sellers because it reduces many of the pain points that e-commerce entrepreneurs dislike. It gives resellers the freedom to travel without the burden of being at their warehouse all the time. It reduces storage costs, logistic issues, time, and technology impediments.

There is also a myriad of tools that software developers have created to make selling on Amazon that much easier. You're able to analyze top selling products, see estimated revenue on products, compare competitor pricing, and other crucial elements to be successful.

Another option is creating your own e-commerce site. Creating your own site gives you the ownership and control of your marketing channel. By using Amazon as your sole source of marketing and distribution, you can easily lose all your sales if they opt to close your business or even halt your services for any reason.

Most people outside of entrepreneurs aren't privy to the private labeling business model. Because of that, even if you are private labeling, most customers won't know that you're doing it. It's possible to create a relevant and established brand through white labeling on your own site. You can choose to do all the shipping yourself or you can work with a fulfillment company that stores and ships your products for you.

By having your own site, you can further engage with customers, establish your brand, and use it as a hub for all your sales. You can add marketing channels like blogs, social media, influencer marketing, and other channels to broaden your audience reach.

Startup costs for a private labeling product business vary, but most of the cost comes from the initial purchase order. Purchasing costs will depend on the cost of the product, order quantity (based on MOQ), and shipping costs. The higher the quantity that you purchase, the lower unit costs become. But when you're first starting out, it's recommended to stick to lower purchase orders until you can prove your product sells well. You also want to purchase competitor products and samples from different manufacturers to verify the quality of the product. The pre-purchasing portion of private labeling is extremely important so you don't spend thousands of dollars on products that don't meet your expectations.

If you start a private label business, most of the initial legwork is finding winning products to sell and sourcing them from manufacturers. If you use the Amazon FBA model, the other bulk of your work will be in getting product exposure on Amazon. If you create an e-commerce site, the bulk of your time will be using other marketing channels to market your products. The last key activities will be fulfillment and customer service. Repeat the cycle with new winning products.

Ditch the 9-5. Take back control of your time. Live life on your terms. Follow what thousands of others have already done. You're just one product away from building a business that can completely change your life!

It doesn't matter whether you're a first, second, or third time entrepreneur. Our battle-tested system shows you -- step by step -- how to launch your private label products into profitability on the Amazon platform.

Most courses teach you only how to use Amazon as a platform to launch any product. That's easy.

We teach you that AND the hard part, which is actually showing you how you can identify the right product to sell with minimal risk, how you can evaluate your competition, and most importantly, how you can implement our real-world strategies to build a real, long-term, sustainable business that will last into the future.

Tell Someone About Private Labeling!