What is Network Marketing?

Network marketers effectively own their own business but have the luxury of not dealing with supply chain, shipping, manufacturing, payroll, etc. The network marketing company deals with all of the aforementioned business functions. A network marketer's primary focus is building an organization of people who market and sell the company's products.

Is it a Ponzi Scheme?

Network Marketing has had its fair share of criticism. Many have claimed that it's really a pyramid or Ponzi scheme in disguise. If you aren't familiar with a Ponzi scheme, it's an illegal business practice that is focused on recruiting people that pay a certain amount to join with little to no product. Once they join, they are told to recruit other people that pay to join and that money gets redistributed to the people who joined before them. It's a scheme that benefits the people who started early on.

The major difference between a Ponzi scheme and a legitimate network marketing business model is actual sales of a legitimate product or service. In network marketing, if there is a fee to join, it's typically for basic business resources like a website, marketing material, forms, training, etc. Most companies also have a minimum product purchase requirement if you want to gain access to higher commission levels. Money is made only when real products are being marketed and sold. 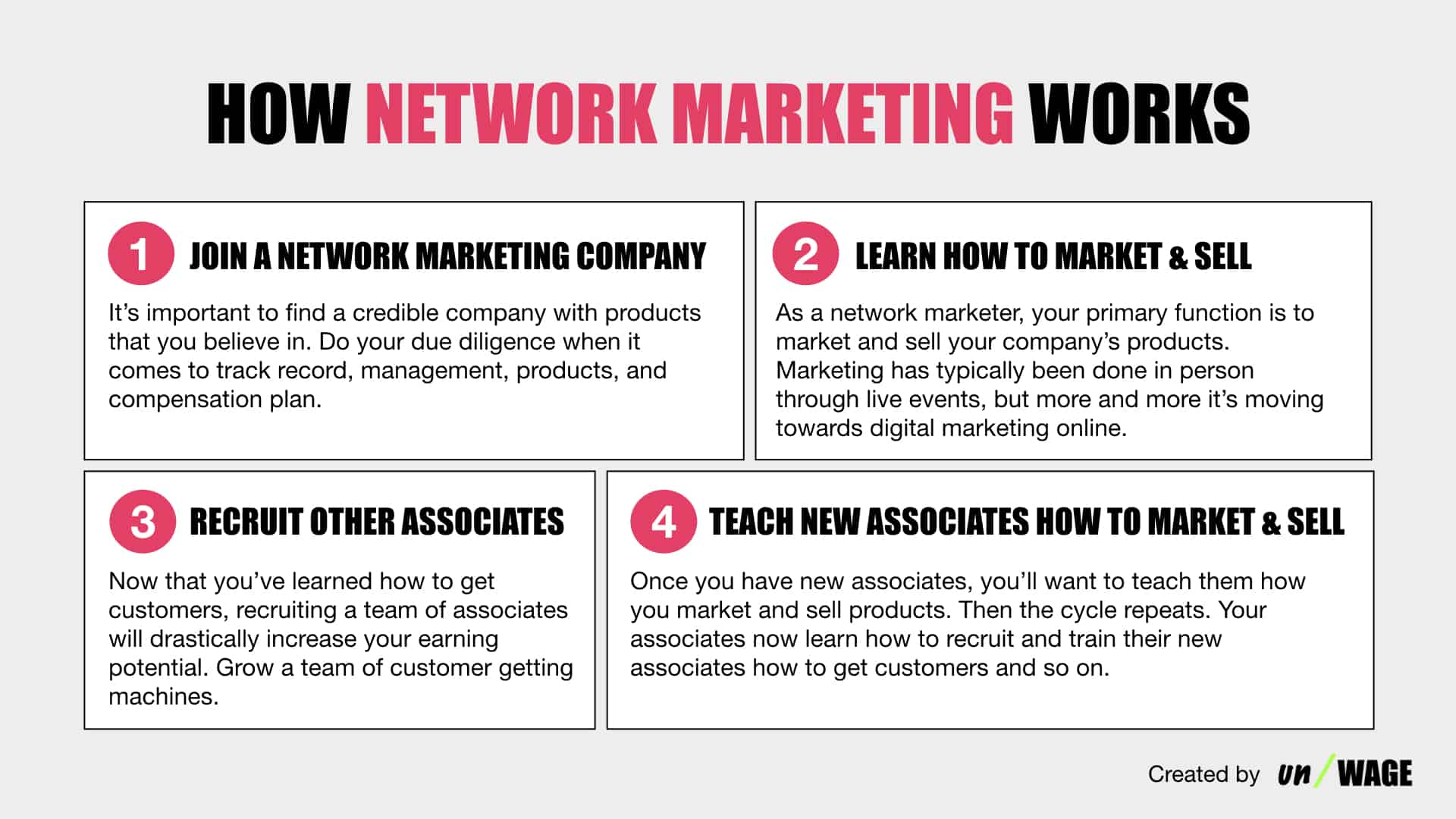 Every network marketing company has a slightly different compensation plan, but most operate under a roll-up compensation plan where the "upline" (the person above someone in the associate organization structure) gets a certain percentage of the sales made by the people below them. This feature of network marketing makes it very attractive for many people because the ability to grow a large distribution network of associates can pay large dividends and create something called residual income through reoccurring purchases.

Key Activities as a Network Marketer

Most of your time in network marketing is spent acquiring new customers and finding new distributors (independent associates). Typically, this has been done through immediate friends, family, and something called "prospecting." This is when you intentionally meet new people, establish a relationship, and introduce them to the products or business opportunity as an individual distributor.

n more recent years, online marketing has taken off in finding new customers and associates. This means using a combination of organic online marketing tactics through social media outlets and paid advertising through social media and search engines. The rest of your time as a network marketer is spent presenting your products and business opportunity and training your new associates to do the same.

Would you like to consistently attract boatloads of super high-quality prospects… WITHOUT making phone calls, begging your friends or posting on social media around the clock?

I’m talkin’ about people with credit card in hand, who are either itching to buy your product NOW… or are truly excited about joining your business… or BOTH!

And would you like to do it FAST… literally with a push of a button?

If the answer is a resounding YES, then you’re in luck.

Tell Someone About Network Marketing!