What is Day Trading Forex?

First, we need to understand what FOREX is to understand how to trade it. FOREX or Foreign Currency Exchange is the largest global network of currency brokers and banks that facilitate the exchange of one currency for another. When you travel internationally and have to change your home currency for Pounds, Euros, or any other foreign currency, you are participating in the FOREX market. Trillions of dollars are wired every day around the world to facilitate international trade, and most of it has to be converted from one currency to another.

Currency exchange rates are not fixed. They fluctuate like stocks, futures, or cryptocurrency. Factors like inflation rates, interest rates, government debt, terms of trade, political stability, recessions, and speculation cause each country's currency to become more or less valuable compared to another country's currency. This fluctuation in currency exchange rates allows traders to profit by buying and selling currencies in an attempt to profit from the disparity in buy and sell price. As an example, you can buy a one Euro today for $1.20, and by tomorrow the price of a Euro may have risen to $1.21, which means if you held a Euro overnight, you would make a small profit of 1 cent.

Now you might think you need a lot of cash to be able to make any real money in FOREX because of the relatively small changes, but because currencies value is fundamentally based on the performance of an entire country’s economy, currencies are a relatively stable and secure asset. The more secure the asset, the more margin banks, brokers, and dealers are typically willing to lend to an individual trader. Most currency exchanges will extend 50:1 margin on the world’s most stable currencies like the USD, GBP, EUR, AUS, NZD, CAN, and JPY. Which means for every $2 you deposit with a retail FOREX broker, they’ll lend you $100 to trade with. This is the most leverageable asset class to trade in the world.

While there are those that day-trade currencies, oftentimes the movement, or volatility, between currencies is slower than that of stocks, futures, or cryptocurrency due to the stability of the underlying economies. However, FOREX provides amazing trading opportunities day-to-day, week-to-week, and even month-to-month due to the immense leverage 50:1 margin offers. 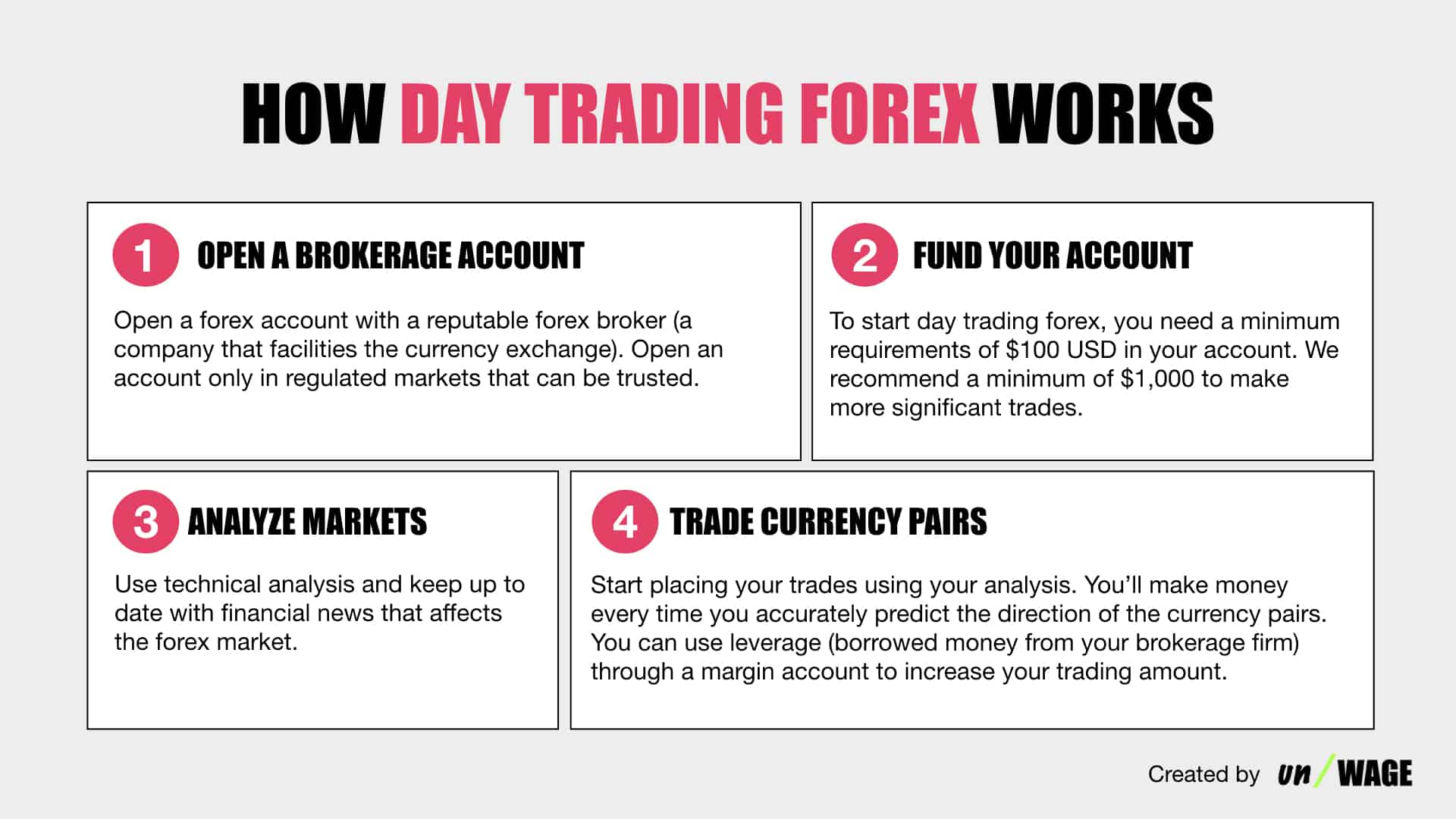 In FOREX, it’s important to remember that prices of currency only rise and fall relative to other currencies. To some degree, this is the same as any asset like a stock. Whenever you want to buy or sell a stock, you are always exchanging cash for that stock. If the stock goes up, you get more cash back, if the stock goes down, you get back less. But, one side of the equation is always stable, the cash.

However, in FOREX trading, everything is moving. Essentially, you are betting against one currency and betting for another currency each time you trade. Sometimes your home currency is one of these currencies, but not always. You can bet for Great British Pound relative to the US Dollar by simply buying Pounds. But, what if you thought the Pound was going to go up relative to the Euro, instead of the Dollar? Remember, everything is relative. If you lived in the US and your home currency was the Dollar, you would have to simultaneously buy Pounds and sell Euros in order to facilitate this trade. Luckily, retail FOREX brokers have platforms that make this really easy to do.

As we mentioned earlier, currencies are relatively stabled compared to most other asset classes that are tradeable, but its because of this stability that you can get a lot of leverage with a smaller deposit on a trading account. The largest margins in the world are offered on FOREX and can dramatically increase your gains, and your losses.

Day traders tend to spend most of their time using technical analysis to find trade opportunities. They'll study charts for patterns, use technical indicators, look at historical data, and other techniques used by technical analysts. At other times, traders are studying financials markets by watching relevant financial news, reading from financial papers, websites, and listening to analyst opinions about the market. While they aren't actively trading, they spend most of their time reviewing their trading strategies and learning new techniques that will make them a more efficient and successful trader.

Michelle Schroeder-Gardner runs the award-winning personal finance blog, Making Sense of Cents. She started blogging entirely as a hobby, and now currently earns over $100,000 a month blogging, with around $50,000 a month of that coming from affiliate marketing.

Her writing and advice have been featured on sites such as Huffington Post, Forbes, Yahoo, Cosmopolitan Magazine, Zillow, US News, Nasdaq, MSN, and more. When she's not blogging, you'll find her exploring via sailboat (we used to RV full-time!) with her husband and our two dogs. They sold their house in 2015 and have been traveling full-time since!

Tell Someone About Day Trading Forex!